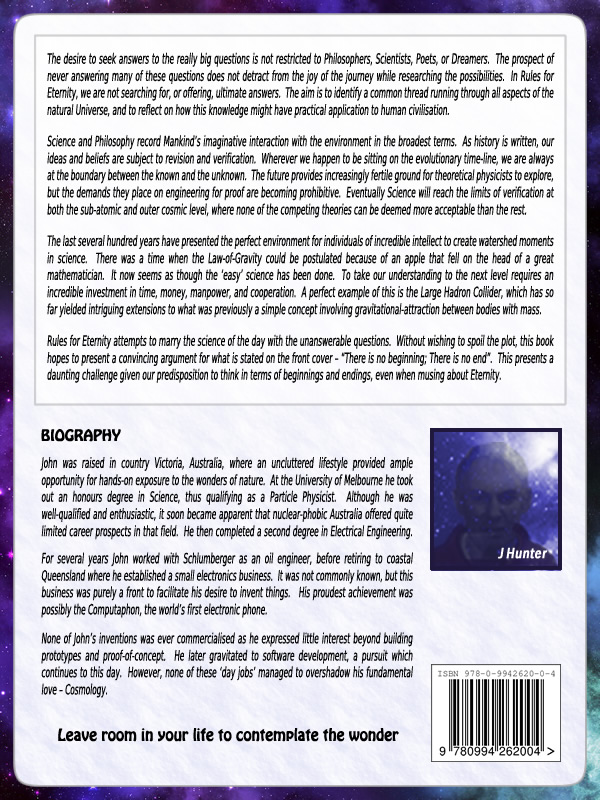 The desire to seek answers to the really big questions is not restricted to Philosophers, Scientists, Poets, or Dreamers.  The prospect of never answering many of these questions does not detract from the joy of the journey while researching the possibilities.  In Rules for Eternity, we are not searching for, or offering, ultimate answers.  The aim is to identify a common thread running through all aspects of the natural Universe, and to reflect on how this knowledge might have practical application to human civilisation.

Science and Philosophy record Mankind´s imaginative interaction with the environment in the broadest terms. As history is written, our ideas and beliefs are subject to revision and verification. Wherever we happen to be sitting on the evolutionary time-line, we are always at the boundary between the known and the unknown. The future provides increasingly fertile ground for theoretical physicists to explore, but the demands they place on engineering for proof are becoming prohibitive. Eventually Science will reach the limits of verification at both the sub-atomic and outer cosmic level, where none of the competing theories can be deemed more acceptable than the rest.

The last several hundred years have presented the perfect environment for individuals of incredible intellect to create watershed moments in science.  There was a time when the Law-of-Gravity could be postulated because of an apple that fell on the head of a great mathematician.  It now seems as though the ´easy´ science has been done.  To take our understanding to the next level requires an incredible investment in time, money, manpower, and cooperation.  A perfect example of this is the Large Hadron Collider, which has so far yielded intriguing extensions to what was previously a simple concept involving gravitational-attraction between bodies with mass.

Rules for Eternity attempts to marry the science of the day with the unanswerable questions.  Without wishing to spoil the plot, this book hopes to provide a convincing argument for what is stated on the front cover – "There is no beginning; There is no end".  This presents a daunting challenge given our predisposition to think in terms of beginnings and endings, even when musing about Eternity.

John was raised in country Victoria, Australia, where an uncluttered lifestyle provided ample opportunity for hands-on exposure to the wonders of nature.  At the University of Melbourne he took out an honours degree in Science, thus qualifying as a Particle Physicist.  Although he was well-qualified and enthusiastic, it soon became apparent that nuclear-phobic Australia offered quite limited career prospects in that field.  He then completed a second degree in Electrical Engineering.

For several years John worked with Schlumberger as an oil engineer, before retiring to coastal Queensland where he established a small electronics business.  It was not commonly known, but this business was purely a front to facilitate his desire to invent things.  His proudest achievement was possibly the Computaphon, the world´s first electronic phone.

None of John´s inventions was ever commercialised as he expressed little interest beyond building prototypes and proof-of-concept.  He later gravitated to software development, a pursuit which continues to this day. However, none of these ´day jobs´ managed to overshadow his fundamental love – Cosmology.